Randolph County Commissioners approved a request by Kraftsman, Inc. of Ramseur to apply for a Building Reuse Grant totaling $140,000. The grant provided by NC Department of Commerce, requires application by a local government with no match required.

The company plans to invest $390,000 to expand its facilities meet an increasing demand on production capacity.

Toyota moves ahead at megasite; construction on first building could begin as soon as June, Randolph official says 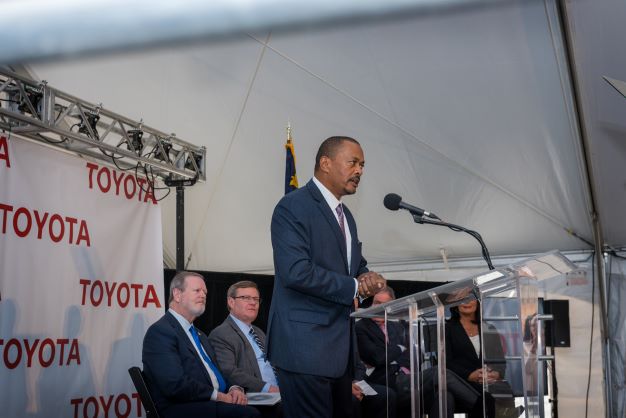 Toyota Motor Corp. is wasting no time getting started on its mammoth project at the Greensboro-Randolph Megasite that will become the largest single private economic development investment in state history.
Grading has begun at the site for the company’s electric car battery factory, said Darrell Frye, chairman of the Randolph County Board of Commissioners. Frye was a leader of the Toyota recruitment campaign.
Leaders of Toyota announced two months ago they had picked the megasite during a Dec. 6 ceremony that drew Gov. Roy Cooper and a slate of state and area dignitaries. The megasite is in northeastern Randolph County near the town of Liberty.

Toyota will spend $1.29 billion on the project. The company will create at least 1,750 jobs. Eventually, the operation could grow to 3,875 jobs and $3 billion of investment.

Frye said Toyota began preparation for the factory on the 1,900-acre site immediately after the announcement.

“You wouldn’t recognize the site now,” Frye said. “There’s a line of earth-moving equipment, and they are building pads. It’s going very well and they are making good progress.”
Construction on the first building in the complex could begin as soon as June, he said.

During the recruitment process for the Toyota factory, area leaders provided a wealth of information about the Greensboro-Randolph Megasite to the company.
Support Local Journalism

“So when we had the announcement Dec. 6, Toyota was ready to go the next morning,” Frye said.

Dec. 6, 2021 announcement that Toyota will build an automotive battery plant near Greensboro
Toyota also is gearing up for its workforce by coordinating training programs with area community colleges, Frye said. The company had a group of officials at Randolph Community College earlier this month to discuss training opportunities through the area community college system.

“Toyota was pleased with the progress and the plans for the training,” Frye said.
Toyota’s commitment to the Piedmont already is paying dividends by creating leads for county economic development recruiters because of the notice the project has generated in business circles, said Mike Fox, president of the Piedmont Triad Partnership.
“It’s a confirmation that our region is primed for growth,” Fox said.
Economic development agency professionals and chamber of commerce executives say they are hearing from business representatives who were prompted by the Toyota announcement, he said.

“Some of the potential users of megasites in our region have picked up their activity,” Fox said. “I think you’ve seen a definite pickup in interest.”