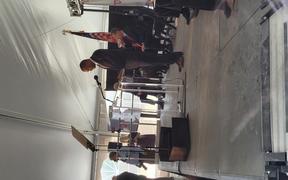 The company that will this afternoon announce a more than $1 billion project at the Greensboro-Randolph Megasite has now been made public.

During this morning’s meeting of the North Carolina Department of Commerce Economic Incentives Committee, an entity headed by the Toyota Motor Company — Toyota Battery Manufacturing Inc. — was approved to receive $338 million in Job Development Investment Grant (JDIG), funds that were included in the 2022 state budget.

Committee members were told during the meeting that North Carolina won out over nine states considered for the project, all of them offering significant economic incentives.

Toyota has already electrified approximately 25% of its vehicle production, committee members were told, which is only the beginning of its plans for hybrid and battery-electric vehicles.

That meeting followed approval of economic incentives by the Randolph Board of County Commissioners in the form of property tax reductions over 20 years plus conveyance of property at no cost, and by the Greensboro City Council for water and sewer service installation at no cost.

Toyota will invest at least $1 billion in the plant and create 1,750 new jobs. A plan for a Phase II expansion, if the company so chooses, would bring the total investment to more than $3 billion and bring a total of 3,875 jobs.

A formal announcement of the project will be held at the Greensboro-Randolph Megasite this afternoon at 2 p.m. Stay tuned to Triad Business Journal for further details later today.