By: The Courier Tribune 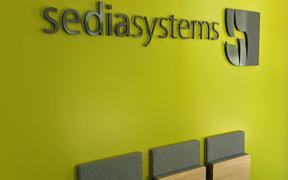 Their clients stretch all over the world, from Columbia Business School in New York City to Hyundai corporate in South Korea. Lecture hall furniture is a niche market, and the few players in that market have a wide reach, according to CEO Wilson Troup.

The new facility is a consolidation of two existing plants in High Point and will be located on 335 Commerce Drive. It will bring the company's manufacturing arm closer to its administrative, accounting, sales, and operations offices.

"The idea was to increase our efficiencies, bringing everyone under one roof," says Troup.

The current headquarters for Sedia Systems are in Chicago, but Troup plans to continue moving operations to and expanding in Asheboro.

Over the next few years, Sedia Systems plans to double in size. Sedia Systems has hired three new employees so far and plans to add another four or five in the next few weeks. Available jobs include packers, machine operators, administrators, assemblers, and project engineers.

A key reason why Sedia has chosen to expand operations in Asheboro is due to the "very welcoming business environment," according to founder Wilson Troup.

Because they serve universities, Sedia Systems gets over 50% of its business throughout June, July, and August, so it was critical to open the plant sometime in May. Troup credits city officials in Asheboro for the quick turnaround time on necessary renovations. Instead of waiting for months and going through layers of ureaucracy, Troup felt that he was supported and encouraged to develop.

"The Randolph County Economic Development Corporation, as well as the city and county, had been very proactive in facilitating the project," says Troup.

“We’re always eager to see a vacant building put back into use,” said Kevin Franklin, President of Randolph County Economic Development Corporation. “It’s great to have Sedia Systems come into our community. We think it’s a win-win for all parties.”

Asheboro Mayor David Smith said he’s excited to welcome Sedia Systems to the town of 26,000 residents and noted that the community has a long legacy of furniture and textile manufacturers.

During the pandemic, the company stayed afloat because many clients were still building new auditoriums, but they lost some revenue since most renovations were cancelled. However, as the pandemic eases, their business has been picking back up.

Troup anticipates significant growth in the coming years and is enthusiastic about Asheboro. "I would be the biggest fan of Asheboro and bringing manufacturing to the area."