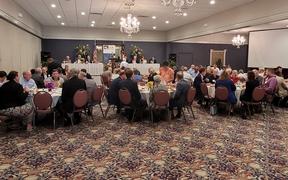 Masks were off and smiles were on as the Randolph County Economic Development Corp. held its first in-person event in more than a year, its 2021 annual meeting, in Asheboro Tuesday morning.

Over plates of scrambled eggs, bacon, sausage and grits, about 100 government officials, local business executives and others became reacquainted with some of their colleagues, elected a new slate of officers and received the EDC’s annual report. They also heard from featured speaker Jeannette Goldsmith, vice president of Strategic Development Group.

With offices in Columbia and Greenville, South Carolina, SDG is a site-selection consultant. Based in Greenville, Goldsmith is no stranger to Randolph County. Among her recent assignments is evaluating potential automotive manufacturing sites for the North Carolina Railroad, which includes the 1,860-acre Greensboro-Randolph Megasite near Liberty.

Tables were full as the the Randolph County Economic Development Corp. held its 2021 annual meeting in person on Tuesday in Asheboro.

In her address, Goldsmith told RCEDC members that considerations companies make in expanding or relocating are evolving — some factors accelerated by Covid-19 — and communities seeking to attract them must prepare and adapt.

Among the trends, she said, is the reshoring and nearshoring of sourcing and manufacturing, the pandemic-induced emergence of quick delivery demands by the consumer, and how both impact warehousing and logistics.

“Who benefited from this? First it was Mexico, then China, then India. The result of that was a decline in manufacturing employment in the U.S.”

The pandemic, though, illustrated the fragility of far-flung manufacturing operations. Industrial globalization requires complex supply chains that could be easily disrupted by natural disasters and by accidents like a large container ship getting stuck in the Suez Canal, for example. To be effective, global industrializing also requires governments to adopt elusive free and fair trade practices.

A continental shift
All that led to the pre-Covid macro trends, Goldsmith said, that included a rise in protectionism and tariffs used as economic weaponry. Meanwhile, development of advancements such as workplace automation, driverless vehicles and AI technology multiplied exponentially.

“One of the things that we’ve learned was, if you think about the cost to manufacture a widget, it used to be that labor was the biggest piece of that pie,” she said. “What happened as a result of these technological changes is labor became a less important piece of the pie, and the things that filled up that space were logistics and the cost to get goods and to get raw materials and goods to and from where they needed to be.”

Through the pandemic, companies learned making products across oceans and relying on global stability for moving product is an unsustainable model. Companies began bringing some manufacturing back, or at least closer, to the U.S.

But not all of it, Goldsmith cautioned.

“We're seeing a lot more of a trend towards nearshoring, or reshoring, so companies that were producing products overseas now are feeling the need to come back and produce here in the U.S.,” she said. “But it's important to note that reshoring is not going to bring all of that production back to the U.S. They’re only going to bring back the production that's needed to serve the North American marketplace. It will be a partial return.”

What's next for globalization?

That could be either the next phase of industrial globalization, she added, “or the end of globalization altogether.”

For areas such as Randolph County with developable land and convenient multi-modal access to the entire Southeast, this renewed emphasis on regionalizing production and the continued growth of rapid wholesale and e-commerce delivery bodes well. Companies are reprioritizing just-in-time delivery to just-in-case delivery, driving the need for spare capacity. That means more warehousing, logistics and delivery, industries in which the Triad already excels.

“Fifty-two percent of companies that are outperformers in our economy said last year that they will start to prioritize spare capacity,” Goldsmith said. “This is going to drive the need for additional warehouse and distribution space, it's going to drive the need to turn on capacity at manufacturing facilities that hadn't been used, and it might result in new capital investment greenfields.

“Total delivered cost is going to continue to be the top driver — what does it take to get your raw materials to your factory, and then what does it take to get your delivered goods to market? That total delivered cost from birth to grave is going to be one of the biggest drivers of capital investment, which puts the Southeast at a unique advantage because we have access to ports in Charleston, Savannah and Norfolk that have a greater productivity than ports on the West Coast. We have access to rail and we have access to consumer markets.”

The beneficiaries will be communities that are positioned to move on these trends with available marketable sites. To be prepared, Goldsmith said Randolph County must make more public investment in infrastructure such as water and sewer, in prepared sites, and in spec buildings. Available buildings are a requirement to get in the game, even as a marketing tool. Companies are often lured to a community to see an available building, she said, even though it may not turn out to be exactly what they need.

“More times than not, they'll end up locating on a greenfield site because they fall in love with your community, your workforce and the assets that you have to offer, but the building isn't just right,” Goldsmith said. “Making those investments is critical.”