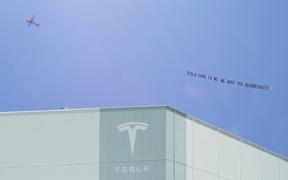 It was a direct appeal made over Tesla’s Fremont, Calif. plant in the form of an airplane flyover pulling a banner saying “Tesla, come to NC. We want you @GRMegasite.”

“We are just letting them know we’d love to have their interest in our site,” said Kevin Franklin, president of the Randolph County Economic Development Corporation, which is involved in the process of finding a tenant for the 1,825-acre site on US 421 west of Liberty.

Franklin said the idea for the flyover banner, similar to pizza restaurants advertising at beaches, was discussed by the members of the Greensboro-Randolph Megasite marketing team.

“It’s to let people know we’re still here and to get the word out to others who may be looking” for advanced manufacturing sites.

Franklin said a pilot and a company that specializes in such banners were contracted for the banner and flyover. “It’s just a typical banner with a certain number of characters,” Franklin said.

Franklin said those involved with the megasite hoped that a local TV affiliate would film the flyover. But more than that, they hope “for feedback from Tesla.”

When asked if the GRM had been in contact with Tesla, Franklin said he couldn’t get into private conversations with any company considered to be a potential client.

The media advisory said the following about the megasite:

“The Greensboro-Randolph Megasite was assembled specifically with a large OEM (original equipment manufacturer) in mind. The megasite is strategically located in central North Carolina midway between New York and Miami, providing easy access to over 170 million consumers in the U.S. and Canada. Just minutes from I-85 and downtown Greensboro, the megasite has ready access to a workforce exceeding 1.1 million within a 50-mile radius. The combination of direct highway access, class 1 rail, robust utilities, a highly skilled manufacturing workforce, and world-class regional education make the Greensboro-Randolph Megasite the premier megasite in the Southeastern US.”